FINALLY. After a long, difficult labour, Gonzo 2 is now finished, and is available FREE to download. This is DRM-free, so if you download it, feel free to share it with anyone you think might be interested! And please, share this post – GC is now an intense labour of love, and I’m giving it away free in the hope of getting more readers, but they’ll only read it if they know about it! 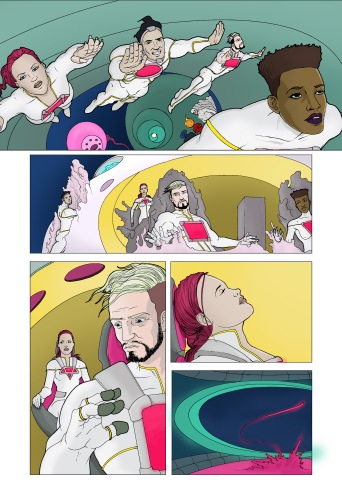 In case you need to get up to speed, issue one can be downloaded here: https://www.dropbox.com/s/a0gtxuuwnssp2k2/Gonzo_Cosmic_1_DRM_Free.pdf?dl=0

Gonzo 2 has some male nudity in’t, so probably NSFW…

So I’ve been working on this Cultural Commission since early 2014. My proposal was to interview members of the LGBT community in Scotland across the generation, and come up with a series of short animations that reflect the changing nature of the community, and also highlighting those things that people have in common.

It’s been through many changes – after interviewing over 10 people, each interview lasting over an hour, I had to sift through those recordings, and let the words of the participants shape the eventual work. Early on I realised I had to change the format – my initial, very basic idea was to do four animations, one each for lesbian, gay, bisexual and transgender. This was limiting for two reasons: 1) it excluded those who didn’t fit under those four labels and 2) very few people I interviewed found it so easy to identify themselves.

The more interviews I did the more I came to see that identity within the LGBT* community is complex and few people identify themselves in a way that can easily be boxed into the format I’d originally planned.

I spoke to butch lesbians, femme gay men, lesbian transwomen, people who would ordinarily be termed bisexual but who felt that term was limiting in a whole host of ways, and a surprisingly large proportion of people who felt that ‘queer’ was a word worth reclaiming.

Back to the drawing board then. With help from Michael at LGBT History Month and with mentoring from Lucy, last year’s recipient of the Cultural Commission, I simplified my idea. They helped me to realise that doing an animation meant that I could do something much shorter, but which packed a lot in. This was great, because animation is a really time-intensive medium, and giving myself anything more than 5 minutes would be a killer to plan and produce.

Lucy in particular, a filmmaker who has produced award-winning short films, strongly advised me to try and keep it as short as possible without losing the thread of the project.

The whole of summer was spent listening to recordings, transcribing, and generally worrying about how it would all come together. But I eventually realised that the broad nature of the participants should actually inform the animation itself. So it’s going to end up a short, compact but fluid piece, with a selection of the participants becoming animated versions of themselves, weaving in and out of aspects of their stories.

The soundtrack will be a bubbling chatter of noise made by combining all of the interviews so far, with snippets of dialogue emerging from it and relating to the visuals.

With that decided, I started work on character designs, storyboards and an animatic made from the storyboard to give me an idea of timings. Participants kindly supplied me with photos of themselves where necessary so I could go about transforming them into characters. I hope people don’t find them unflattering… I also wanted the characters, while representing the actual participants, to have a general quality about them so that the audience who views the film can see themselves in it too.

So below, you can see my work in progress so far. Character sheets, storyboards, and a very rough animatic. The next stage is working out the timing for the animation and getting down to the business of drawing over 1200 hand drawn frames. I hope it looks as good in reality as it currently does in my head! 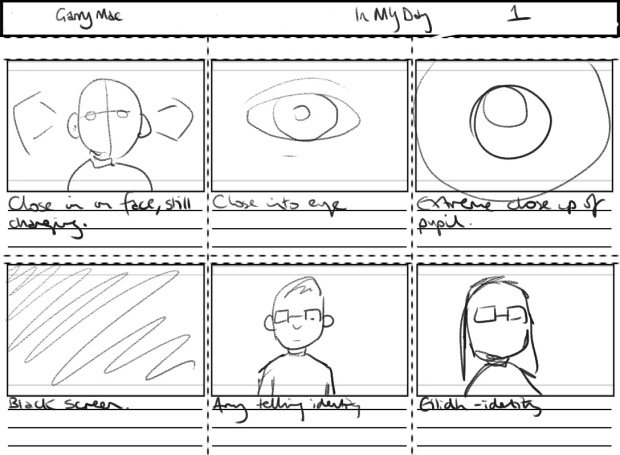 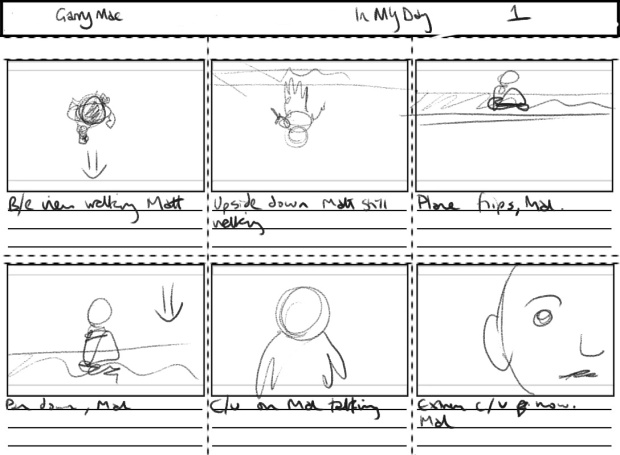